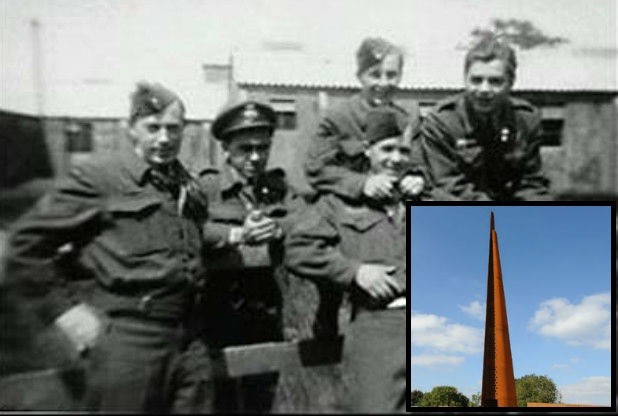 A 93-year-old Bomber Command veteran has found the name of a family friend’s Canadian brother on the Lincoln memorial – more than 70 years after his death while serving at an airbase in Lincolnshire.

Londoner Ronald Davis, who served at RAF bases at Scampton and Winthorpe during the Second World War, has contacted relatives of Flying Officer Eddie Saslove to tell them that his name is etched in steel at the International Bomber Command Centre on Canwick Ridge overlooking Lincoln Cathedral.

And he has been thanked by the pilot’s relatives – 38 years after he showed his brother the name on the RAF Memorial at Runnymede.

He said: “In 1978 the parents of a friend of my daughter, Mr and Mrs Martin Saslove – from Ottawa, Canada – visited London and I offered to take them out for the day anywhere of their choice.

“Martin told me he had a brother – Edward Lewis Saslove – 10 or 12 years older than him who was killed during the Second World War whilst serving in the Royal Canadian Air Force and he would like to visit the RAF Memorial at Runnymede.

“We made the trip and found his brother’s name on the memorial – and Martin was extremely grateful to me for what I had done.

“My daughter, Avril, lost touch with her friend, Rhoda, and it was not until mid-2014 that they re-connected through social media.

“When I went to the unveiling of the spire memorial at the International Bomber Command Centre at Lincoln I thought that if he had been stationed in Lincolnshire his name was bound to be there – and I was amazed to find the name E Saslove.

“I contacted Martin and he was pleased to know his brother was not forgotten.”

Mr Davis said Martin Saslove had since given him the details of his uncle’s Lincolnshire seervice and the circumstances of his death.

“Eddie was a Lancaster pilot belonging to 576 Squadron based at Fiskerton.

“The crew consisted of Max Chisick, Bob Hood, Albert Campton, Glen McLelland and Eddie, all of the RCAF and Taffy Davies and A Hoyle of the RAF.

“Sadly, the Lancaster was shot down by a German night-fighter airplane on January 7 1945.

“Although the bomber was badly damaged all the crew were alive, but with some injured.

“They were ordered to bale out by Eddie. Apparently four of the crew did so, but Eddie knew that two – Campton and McLelland – were wounded and having difficulty.

“If Eddie had been other than the pilot he too would have baled out, but with his responsibilities he did not do so.

“So Eddie in fact attempted to land the aircraft rather than leave two of his crew in a pilotless aircraft to a certain death. All three died in the crash.

“All four of those who bailed out – Chisick, Hood, Davies and Hoyle – were captured and made prisoners-of-war and eventually returned home.”

Nicky Barr, director of the International Bomber Command Centre, said: “We were delighted to host Ronald, along with 311 other veterans at our unveiling event last October.

“His story resonates with the sense of community that is already inherent within the wider Bomber Command ‘family’, but that is being cultivated within the IBCC project as well.

“These men are the forgotten heroes and we are doing everything we can to ensure that their stories can be told and preserved for generations to come.

“The IBCC is hugely lucky to have the support of a large number of veterans and we honour them all.”