“Fiskerton” means Fisherman’s Town and Fiskerton was a fishing village as well as a farming village until the drainage of the Witham Fens after 1782. The river Witham now runs between high banks at the bottom of the field below the Churchyard, but in earlier times it flooded these low lying fields, and a channel reached up to the very slope of the Churchyard where there was a quay for tying up the shallow fen-boats.

The Manor of Fiskerton (the medieval Manor Farm stands opposite the Church) was granted to the Abbey of Peterborough by King Edward the Confessor in 1060. It is as a direct result of that grant that almost all the land in the parish belongs to the Church Commissioners to this day. The patrons of the living are also still the Dean and Chapter of Peterborough Cathedral.

Fiskerton is mentioned in Doomsday Book, compiled for William the Conqueror in 1086. It is recorded that: “there is a Church there, and a priest”. Of the Church that was standing in 1086 parts probably remain and are incorporated in the building we now see. 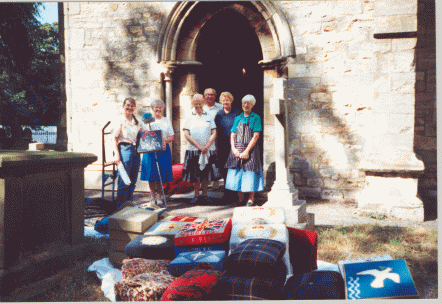 The tower may be the oldest part of the Church. The outside of the tower is of the 15th century; but the inside reveals that a square outside has been built on to an older round tower. Round towers are common in Norfolk, but not in Lincolnshire. They are usually of an early date, many being pre-Norman.

The North doorway shows a Norman arch; and the arches between nave and chancel and the North aisle are also Norman. These arches are strong and simple, and perhaps the most pleasing part of the Church architecturally. At the top of the North aisle just in front of the organ screen is to be seen part of an old staircase, leading originally to the rood loft.

The South part of the Church is of a later date and shows several incongruous features. It seems fairly clear that at some time (perhaps in the 15th century) the whole of the South half of the Church was rebuilt. A lot of older pieces were used again but many of them not in their proper places. This part of the Church is a curious architectural muddle.

The arches between the nave and South aisle are of about 1250. The pillar by the Font is interesting for its cluster of columns round a concave core; a design copied from pillars in Lincoln Cathedral. The Font itself is also from about 1250; though this has been damaged and at some time buried part way in the ground.

In the Lady Chapel there is a tomb recess, though this is an example of older material reused for there is no tomb there now. Behind the alter, along the East wall of the Chapel is a fine frieze of carved stone, possibly Norman. On the floor is a good 15th century brass of a priest in a cope, on which is a pleasant oak-leaf motif. This is said to be Thomas Dalyson, once Rector of the parish. The picture of the Madonna and Child is by a 17th century Italian artist, Carlo Dolci, who painted many devotional subjects of this sort. The picture was given to the Church by the RAF in 1946.

The whole Church was much restored in 1863, and all the stained glass and interior furniture, including the screen belong to th 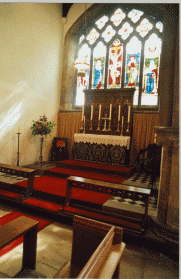 e 19th or 20th century. The Skepper window situated next to the tower was donated by the Skepper family (designed by William Wailes [Durham]). The east window (Designed by Messrs Burlison & Grylls) is later, both it and the Chancel screen, were put in at the same time. They are so designed that the figure of Christ on the Cross, when seen from the West end of the Church, stands above the screen like a medieval rood. Both were the gift of Canon Vines, Rector for 52 years at the turn of the century. The organ dates from 1870, before which time the singing in the Church was accompanied by a village band. More recently the Church tower pinnacles have been restored and the Church re-roofed.

Because most of the parish land belongs to the Church, there has never been a particular family of landed gentry in Fiskerton. Both Church and Churchyard lack the grander monuments and tombs of many a country Church. There are indeed in the Churchyard few stones older than the last century, for until then it was not usual for the graves of the common people to be marked in any way. But, although without any grandeur, there is a homeliness and peacefulness about the Church and its Churchyard that are the essential charm of an English country church. Fiskerton Church seeks to be no more than that which it has always been; the place where the common people of this village meet to worship their Maker and their Saviour.