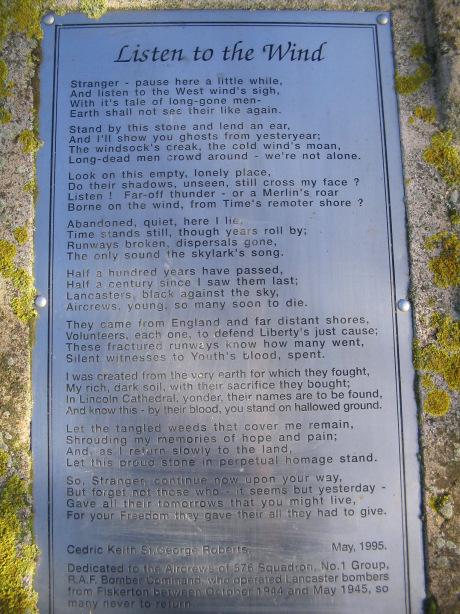 here a little while,

And listen to the West wind’s sigh,

With its tale of long-gone men –

Stand by this stone and lend an ear,

And I’ll show you ghosts from yesteryear;

Look on this empty, lonely place,

Do their shadows, unseen, still cross my face?

Listen! Far off thunder, or a Merlin’s roar,

Borne on the wind from Time’s remoter shore?

The only sound the skylark’s song.

Half a hundred years have passed,

Half a century since I saw them last;

Lancasters, black against the sky,

Aircrews, young, so many soon to die.

They came from England and far distant shores,

Volunteers, each one, to defend Liberty’s just cause,

These fractured runways know how many went,

I was created from the very earth for which they fought,

My rich, dark soil, with their sacrifice they bought;

In Lincoln Cathedral, yonder, their names are to be found,

And know this – by their blood, you stand on hallowed ground.

Let the tangles weeds that cover me remain,

Shrouding my memories of hope and pain;

And, as I return slowly to the land,

So, stranger, continue now upon your way,

But forget not those who – it seems but yesterday-

For your Freedom they gave their all they had to give.

Dedicated to the Aircrews of 576 Squadron, No 1 Group, RAF Bomber Command, who operated Lancaster bombers from Fiskerton, between October 1944 and May 1945, so many never to return.